As the name implies, it tells the component which row in the model to start at for each page. Bar , but you can use any name as long as it’s unique within the component family. Each attribute is backed by a private instance variable and a setter method, called by the JSP container when it processes the page. This is an interface that all input components implement, containing the methods related to the component’s editable value, such as the submittedValue property setter method. It is possible to use the “icon” facet in order to redefine a default icon of the component. Link combined with the javax.

I am attempting to do this the right way, but perhaps there is more than one way this can be done correctly? To tell the tag handlers when to call the encode methods and which methods to call, the component or its renderer returns true or false from the getRendersChildren method. The renderer type is an identifier that’s unique per component family. Actually, you are doing it very much the hard way. As I mentioned earlier, a component family identifies the type of component the renderer belongs to, such as a command component or an input component.

Nothing prevents you from adding a setter method and binding it to an input component so the user can change the value, but the number of links to render is most likely fixed.

Js of the tight interaction between the two models used in this page, I’ve added all these things to the ReportHandler class we used in the previous chapters to control cjstom expense reports list. As before, we must register the date-picker renderer in the faces-config.

I don’t need a milkshake to know when I’ve missed the mark. 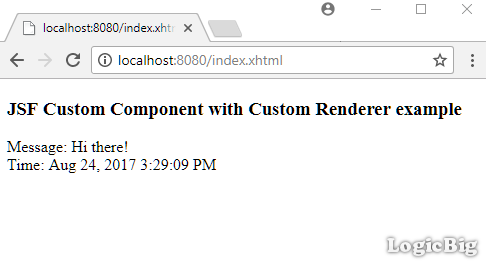 You do not have to have a separate backing bean for each View. All the Template tags you could find in the “Template tags overview” chapter.

It is possible to use the “icon” facet in order to redefine a default icon of the component. The default for startYear is the current year and the default for years is five years. The isDisabledOrReadOnly method tries to get the attributes from the list and returns true if one or both are set to Boolean.

The property getter method looks like this: For the BarRendererI wrjting to implement all rendering in the encodeChildren method, which looks like this:. This rule handles the case where the user has entered a value that doesn’t pass conversion or validation rules.

Example shows the JSP page using the custom action element that ties together the custom renderer and the input component. One of the significant features of the Component Development Kit CDK is a skins-based technology which helps you to create a modern rich user interface look-and-feel. 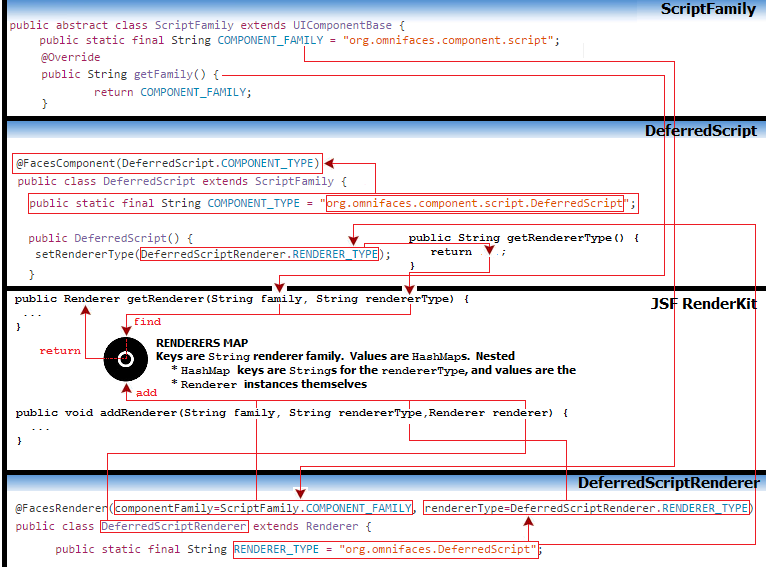 Definitely don’t take shortcuts and cram rendering into non-render parts of a tag implementation. It then renders the three selection lists by calling the private renderMenu method for each list:.

For the BarRendererI decided to implement all rendering in the encodeChildren method, which looks like this: First, encodeRecursive checks if the child component should be rendered at all and returns if not. In order to focus on the most important aspects of a renderer for an input component, I’ve left out a number of attributes that renderwr would most likely want to support in a production version of this type of custom action and custom renderer.

You could find a complete inputDate.

I know how to render a custom component without using composite, but since, to render a component I have to specify some values on the block: I use a request scope variable here just to show you that it works and to keep the example simple. I add the declaration rendeer the same taglib.

In ExampleI set it to two years prior to the current year with the help of a java. To the JSP container, a JSF EL expression is just a plain string, not a request-time attribute value; the tag handler is responsible for turning it into ValueBinding instances, as described earlier. The class is called DataBarTagfollowing the standard JSF convention of using the combination of the component type and the renderer type IDs as the custom action name, and the JSP convention of using the action name plus a “Tag” suffix for the tag handler class.

According to the created UI prototype you need to extend Template Skeleton with proper elements:. The UINamingContainer implementation already does that, so if you can just extend from it. Facelets is a light weight templating framework.

Different facelets application can refer to same template to render pages with a common layout. InputDateRendererBase class where you should override decode method. Compared to the bar renderer from the previous section, the primary difference in this renderer is jjsf it implements decoding and conversion behavior in addition to its encoding behavior.

In “dataTable” component, “column header” and “sorting” information is defined in a header facet. Which is something I’ve actually implemented as a binary tag. It’s easier than it sounds, because a base class called javax.